New House Next Door to the Pond 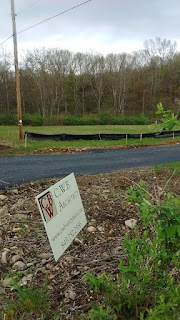 The design and engineering of this project started years ago and it's exciting to see the construction phase beginning this spring. Once the framing crew gets on site, you know it will move along to completion FAST.

The site is large and wooded with a meadow by the road and a small pond fed by a running stream. Even with the spring-flowering trees, and the bright green new meadow grass, the photos don't do it justice- it's a really beautiful spot.

The site has many restrictions as to where a building could be located and the solar exposure and pond views are, unfortunately, in opposite directions - so orienting the house and planning the fenestration (window location) was challenging!


The site plan shows the house located up the hill on a level spot, with the driveway crossing the stream and following an existing old farm lane. The thick, dashed line surrounding the pond and stream indicates the wetlands buffer, where no construction can occur. The two funny lined boxes on the top left are the septic area located in the meadow down the hill behind the house. The small dashed rectangles between the septic and the house are the original proposed house locations, which were rejected because of the steep, rocky, topography, poor solar orientation, and concerns about drainage flowing down from the higher ground. The front long face of the house faces south to allow sun to shine in. The garage is tucked behind the house - to the north. Exterior living spaces jut out to the south and west for fun in the sun or in the evening listening to peepers at the pond.
By hiring an architect, one of the many benefits clients receive is a "site responsive" design. (the opposite of choosing a house plan from a book in which the designer never even saw the site and the building is just plunked down without much thought as to views or sunlight- mostly the only thing accounted for is how the car drives in)  As I blog about this project over the next months, I will discuss some of the site analysis (and "program analysis"- architect's word for the required rooms and how they relate to each other and the site) and how that early research informed the final design and placement of this house on this site.

Site work began over this mild winter with tree clearing at the building site and for visible sight lines at the road curb cut. A driveway with an Army Corp of Engineers approved stream crossing (aka bridge or culvert) has been the major work so far, along with a graded, landscape-fabric-lined driveway.

Next the hole for the foundation is being dug out- and the encountered rock is being hammered out. The G.C. (general contractor) plans to have the foundation concrete poured this month.

Before and After - Village Home Renewal


This was an interesting renovation project I worked on a few years ago. Located on a corner lot in a village, this interesting older house was in a state of half-completed projects, that a DIY-er had begun decades ago, but never completed. The un-finished second floor attic space became two new finished bedrooms with closets. Insulation and ductless A/C was installed to keep those difficult to moderate rooms-in-the-roof comfortable. 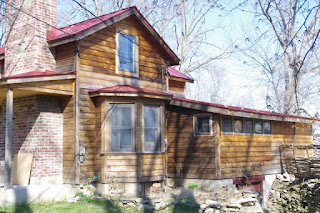 The 1970s long, low "side wing" additions were given new repeated square windows to bring some order to the exterior elevations and to make neat light/air punches over the kitchen counter and in the bathroom/laundry room. The free-standing shade pergola was moved to the back yard and a new front porch was constructed to protect the front door and announce it as the main entry. A new red metal roof unified the entire house. A new screened porch and enclosed outside storage area was designed to hide/fix a strange blank wall and asymmetrical shed roof over the glass doors to the back yard and also helped to define the back of this exposed corner lot as more a more private space for the new owners to enjoy.

Posted by Christie Wheate Billeci at 2:32:00 PM No comments: