Porches for the House on the Lake

The work at the family house on the lake is continuing with the framing inspection complete and now roofing and siding being applied and porch floors and roofs built.

This house is all about the continuity of the family that has owned it and used it - first as a full time residence of grandparents starting in the 1920s - and now as a seasonal gathering place for extended families of multiple generations from throughout the country. Some aspects of the home that exist and have existed for as long as many can remember were not negotiable to change in the redesign. One of those elements is the green metal roof- which isn't that old, but lends real character to the home. Another is the white cedar siding which is very traditional and likely original to when it was first built before this family even owned it.

The other thing this house is about is gathering and enjoying the lake. This fact makes the back screened porch the most important "room" in the place. As the largest space, it is one of the few that can accommodate a large group- be it baby shower or marriage celebration or weekend reunion. It is literally the best place (other than sitting on the dock?) on the property to view the lake. 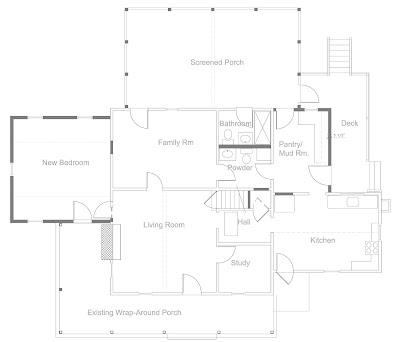 I changed the dimensions and orientation of the former screened porch, as well as how it connects to the house. I made it much deeper- before it was under a long continuation of the main roof and was limited to 9'-10" -way too narrow for comfortable outdoor furniture. I also increased the width by 2' and rotated the roof and removed any flat ceiling so the space is vaulted up to 12' tall at the center roof beam.

In addition, since I was giving the space it's own lake-facing-gable roof, not sharing the main roof, I could slide the whole space over a bit. This movement accomplished two things: One, even with the new porch 15' deep instead of 10', I could show the Town's Zoning Board that we hardly were building any closer to the edge of the water. This was important as the existing structure was already encroaching on the allowable 75' setback from the rear/lake. The other important gain of sliding the porch toward the east was that I could connect the kitchen to the screened porch. The old plan lacked this connection, so this will be a great change.

The home has a traditional street-side wrap-around front porch which remains and now ties into the new first floor bedroom with a glass door.

Lastly, there is a new small side porch that provides a way to get to the yard from the screened porch and from the yard into the kitchen/back of the house. When a porch is higher than 30" above the grade, the code requires a guard rail for safety. Since we don't want to obscure the lake view with a bunch of solid wood posts, I specified a cable railing system that becomes almost invisible and lends a sleek, nautical element on the mostly traditional exterior.

In addition to the functionality of these porches (outdoor rooms!) the site slopes down toward the lake, leaving lots of storage space under the almost 400SF screened porch. Some of this area will be tall and some low to store boats and other gear. The perimeter will have a traditional lattice treatment and a custom hinged door to easily access and keep hidden that storage space.

Posted by Christie Wheate Billeci at 3:53:00 PM No comments: