Modern Farmhouse after a Fire - finishes

My 'Modern Farmhouse after a Fire' Project is almost finished. I stopped by on a sunny winter day to check it out. The exterior has all the siding and trim and roofing installed and it looks classy in black and white. The porches and decks and balconies are mostly finished - just some railing needed here and there. With the stark blue sky of winter, the sun and the mountain view from the back of the house are striking as you stand inside the new living spaces.

Inside the cavity insulation and spray foam and rockwool has all been installed in walls, attic and basement and the sheetrock has been applied and taped and in some cases, painted. The HVAC system is mostly installed, but not yet turned on - and the contractor stated that even on this 15degree morning, the two space heaters they use warm up the house easily. (Can't wait to see how this place performs on the blower door test.)

Kitchen cabinets are delivered (in boxes in the garage) and the contractors wood shop is busy building the stair and interior trim pieces so that once the sheetrock is painted, the trimwork and other interior carpentry can be installed.

It all looks GREAT and will only get better once the faux brick arch is constructed and the fireplace hearth is in place and the wet bar is built and and and. This is a fun project with mail slots and charging stations by the every-day entry and reclaimed barn wood being used as accents in the powder room. Stay tuned for those awesome interior material photos coming soon!

Click here to read the previous posts about this project:

Posted by Christie Wheate Billeci at 4:56:00 PM No comments:

Here is another New Family Room Next Door project. The existing home is standard ranch style with rooms that are fairly small with flat 8 foot tall ceilings. A newer master bedroom addition with soaring ceilings is the exception- but, that space is private. The folks living here wanted a bit more living space that took advantage of the western wooded view and included some cozy creature comforts: an outdoor spa tub, and a stone fireplace- while incorporating some of those high-ceilings they have in their bedroom and adding light and view.


The room was designed to be open to the existing dining room, and just steps from the kitchen through a pair of glass pocket doors. It functions as a family room off the back (more private) side of the house- as opposed to the living room, which, like the layout in many homes, is facing the street and at the entry.

The new room has lots of windows and a sliding glass french door to a new, more private deck. The deck was placed so that it connected not only to the new family room, but also to the master bedroom, which already had a sliding glass door. The spa tub was located on this deck (some serious structural piers designed to hold that weight!) and so is just steps from both the master bedroom and the new family room. The hot tub is tucked among some trees for a feeling of really being in nature while soaking.

Thoughtful lighting placement and interior plank wood ceiling accentuate the symmetry of the vaulted room and make the focus of the room be the stone around the (real wood burning!) fireplace and the antique timber mantel shelf. The family finds they use both the tub and the fireplace as part of their regular routine- making these new spaces true improvements to their lives that encourage spending time together.
I think of this design as the hygge project because of the health and wellness aspects of using a hot tub and the contentment of sitting by a fire and how these features- and both the interior and exterior new spaces- truly help contribute to an improved quality of  life for the family living here. Sunday evenings sitting by the fire sure sounds cozy!

From Wikipedia:
Hygge (/ˈhjuːɡə/ HEW-gə or /ˈhuːɡə/ HOO-gə) is a Danish and Norwegian word for a mood of coziness and comfortable conviviality with feelings of wellness and contentment. As a cultural category with its sets of associated practices hygge has more or less the same meanings in Danish and Norwegian, but the notion is more central in Denmark than Norway.[1] The emphasis on hygge as a part of Danish culture is a recent phenomenon, dating to the late 20th century.
Posted by Christie Wheate Billeci at 10:59:00 AM No comments:

Here is a glimpse into a small project I designed. Let's call is the New Family Room Next Door. :)

The existing home is a small historic two story village home. Like most village layouts, adding off the back was really the only option for increasing living space. (side yards are small or non-existent in village-type zoning where houses are placed close to each other and close to the street/sidewalk)

The home already had a single story kitchen addition all along the back of the two story structure, and then a covered porch off the back of that.

To keep the project economical, we used the area that once was a covered porch and changed that space into the new family room. We reused (and added more) the pier foundation from the porch for our new room, and kept the low-pitch shed roof in the same configuration as what existed, so second floor windows were unaffected.


Work continues at the New House After a Fire. Roof installation is underway along with the white fascia boards and drip edge all around the edge of the roof plane. (see the coils of metal?) The back deck - which is expansively large and accessed by 3 doors in 3 rooms - has been built, along with its railing and stair. The balconies have their decking, but don't yet have their railing. Check out the fantastic mountain view and you can see why we have these outdoor spaces.

Inside, the plumbers and electricians have been busy installing wiring, supply and drain pipes, and duct work for heating and cooling. Not pretty stuff, but we can all agree, super valuable! Some photos of their work before it all gets covered up by wall board:

New House After a Fire - Framing


You can see the cantilevered balconies jutting out the back of 3 of the bedrooms on the southwest. The windows have been installed and you can see the higher ceiling dining room and kitchen has transoms above the glass door and kitchen sink feature window. They were framing the back deck yesterday - and then it will be time for interior and exterior finishes.

Posted by Christie Wheate Billeci at 1:01:00 PM No comments:

Rebuilding a Modern Farmhouse After a Fire

Here is a new project to follow on the New House Next Door blog:


The New House After the Fire


This is almost a new home design, except it's not. A house stood on this property - it was a 1.5 story type house, which means the second floor is up within the roof, often with dormers popped out of the roof for additional space and windows. A fire devastated the structure.

So what started as a bad situation has led to an opportunity. We have designed a new modern farmhouse with more space, a full second floor, an attached mud room and garage, and an expansive custom-truss roofed open chef's kitchen where once was a family room that suffered by being so disconnected from the rest of the home. The new home will serve the family that lives there much better because we took the time to think about what worked in the former home and what did not and we didn't stay attached to placing rooms, like the kitchen, in the same spot on the floor plan just because that's where it was before.

The former house had 2 parts - on the right was the 1.5 story Cape-type part with living/kitchen/dining and 2 bedrooms on the first floor and 2 more bedrooms upstairs within the dormers. On the right side was an addition that was built with a lower floor height, so that from the kitchen one could climb down a few steps and be in a large sunken family room. This part had no second floor atop it, and so could have higher ceilings, but I don't recall if it really did. The back of the home had a large deck and a new 3 season room to enjoy the mountain view. The only thing that could be saved was the foundation under the family room area (where is was fairly new, and made of poured concrete) but the "sunken" nature of it was undesirable and created problems, so in the new design we add a special foundation wall extension to bring the height of all the floors even with each other. The older concrete block foundation was deemed insufficient, but the new poured foundation in that area will still be exactly the same size/shape the old one was. We are adding a 3rd part on the left side that is a slab on grade as will be the foundation for the new mudroom and attached garage.

Posted by Christie Wheate Billeci at 4:12:00 PM No comments:

New House Next to the Lake is Ready for Summer!

Just in time for the family to come enjoy their vacation home on the lake, it's all finished for Memorial Day weekend. Here are some final pictures with the lattice enclosing underneath the new screened porch, the exterior painting all done, and the interior plumbing and cabinets installed. This family homestead is transformed!


From repairing mundane, invisible but appreciated items, like recessing a steel support beam into the living room ceiling and installing a new septic system- to creating usable, beautiful new spaces- like a much larger screened porch and kitchen work area - to creating more sleeping spaces with a bit more privacy and a bit more air/light/view toward the beloved lake - to all new renovated bathrooms, refinished floors, and light fixtures & electrical service.


This project combines a mix of keeping the old and traditional, while embracing some new materials and methods as well. Check out the old wood door leading into one of the bathrooms (on right side of pic above). Old site-built plank doors like that one were kept and reused inside- like leading into the new first floor bedroom from the living room. The exterior siding is a very traditional white-painted shingle style, with dark green trim while the railing system for the screened porch and deck is a stainless steel cable type (chosen because it would obscure the lake view the least). 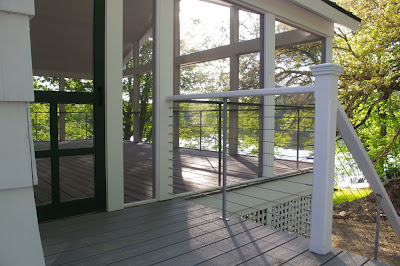 Posted by Christie Wheate Billeci at 2:06:00 PM No comments:

Email ThisBlogThis!Share to TwitterShare to FacebookShare to Pinterest
Labels: adding on an old house, elevations, Family House on the Lake, finish, porches
Newer Posts Older Posts Home
Subscribe to: Posts (Atom)
Please visit my website:
christiebilleciarchitect.com
to see more from my portfolio
and learn about how I approach
architectural design