Framing at the New House Next to the Pond

Here is an update on The New House Next to the Pond.

The last post (click HERE to read) showed the site work and the footings - photos of dirt and concrete without too much to help you envision the beautiful house that will be there... But now we have insulated foundation walls and the first floor system and first floor walls framed.
In the photo above you can see the walk-out basement room on the left that looks toward the pond. Dirt and a retaining wall will bring the grade higher than it looks now, so that the front porch will only be 3 steps up. You can see the cardboard sonotubes sticking up at the front/south and on the west. These will be filled with concrete to provide a footing for the front porch and screen/sun porch roofs.
On the right side you can see the cantilever bump-out that is part of the eating area, and then the master bedroom wing in the background. In general, you can start to see where windows or doors will be located.

Some plumbing has been roughed in under the basement slab so that a future bathroom can be built on the lowest level. (white pipes sticking up on the right). The opening in the floor shows where the stair will connecting the levels.

This is the back of the house. On the left is the master bedroom wing, which also is where the garage will connect into the mud room. On the right is the high spaces for the office and living room with the stair in between.

The 24' x 36' garage is tucked behind the house. They will start building that next and then build a connection between the roofs for a dry walk from house to car.

Coming up: Second Floor framing and Roof!
Posted by Christie Wheate Billeci at 3:22:00 PM No comments:

Program Analysis for the NHND to the Pond

After (but really during - that's the thing- architects are thinking about everything all at once) analyzing the building site, (see post about Site Analysis HERE.) I analyze the building program. The "program" is the architect term for all the spaces that are needed/wanted and in the analysis we think about how they relate to each other, the size or proportion of each space, and where on the site (solar orientation,view, privacy) is the most desirable. (for example, the kitchen wants to be near the eating area and also convenient for carrying in groceries, and perhaps wants to be open to the living space, and sunny in the morning and throughout the day.) The program for just about anybody's house can be similar, of course, but a custom-designed house can be more responsive to the wants and needs of the folks who will live there and to the specific site the building is on. 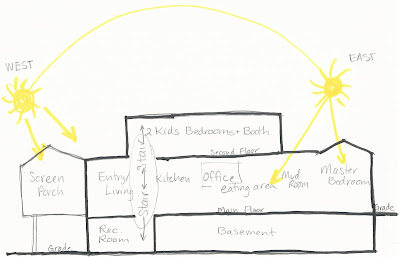 These clients liked the idea that this house would have almost all the spaces be on the main level, with only the kid's spaces being upstairs, and a (future) recreation/guest room facing the pond in the basement level where the hill drops away. A very large garage was included to store two cars and the myriad of outdoor recreation equipment the family owns. With all this ground-floor space, this was starting to look like a really big footprint on the site! Aside: When I asked them to show me photos of architectural styles they liked, a two-story farmhouse "box" was among their picks, but I had to explain that that was not at all the massing we were ending up with because of the master bedroom, office, etc all being on the main level. They also showed me lots of bungalows, capes, and craftsmen styles, and stylistically that's what we strove toward with our design, as those building shapes tend toward prominent roofs with minimal upper floor spaces being located within the roof/attic. That is another aspect of pre-design: looking at precedents- a picture really does tell a thousand words, so I always ask clients to show me photos of things they like and explain what they like about them.

You can see photos of the above "modern bungalow" at another blog by clicking below:
http://hookedonhouses.net/2015/03/16/a-new-bungalow-built-to-blend-into-an-old-neighborhood/

One of the best ways to "be green" when designing a building is to keep the building as small as you can. Early on, my clients decided they didn't need a formal dining room and that one eating area and one living/family area was all they needed- and this helped a lot. They wanted an open and informal kitchen/living/eating space and liked the idea of incorporating a built-in bench for the eating area. Built-ins are great space savers! (think of a Tiny House on wheels and how everything is built-in) A built-in bench seat can be right against the wall/window, whereas with chairs around a table, you need 2.5 feet minimum behind each chair to slide it back or walk around, ending up with a much larger required space. I proposed a few more built-ins (storage cubbies and a bench in the mud room entry from the garage, a window seat & shelves to display art and store books in the master bedroom, book shelves on the stair landing) and all these features added to the functionality of the space and allowed each of those rooms to be a bit smaller, while also adding interest and detail. (but I'm getting ahead of myself again) 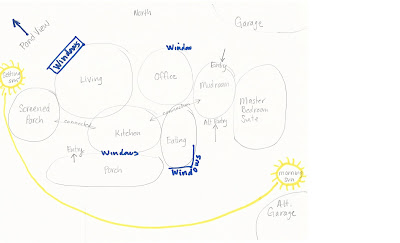 In placing the spaces in relation to each other and on the site, I ended up with something like the diagram above. I wanted  the kitchen to be the front/south - open to other spaces -including an outside space- and filled with light. I wanted the garage hidden but with a direct connection to a mudroom entry. I wanted a sunny southern porch and a western facing sun/screen porch toward the pond. I wanted the master bedroom to be away and private and not have any second floor over it, so I could vault it's ceiling and give it a feeling of expansiveness despite it's not-huge size. I wanted to office to be able to be closed off for privacy, but to also be able to be open to the living spaces with wide pocket doors to share space when they want/need extra space. I wanted the stair to be a beautiful piece of woodwork that is visible from the living area. I wanted diagonal views from kitchen, through living toward big windows facing the pond and long views from the master suite toward the public areas of the house. Of course, I wanted them to have lots of storage space, but also lots of windows and an friendly, uncomplicated feeling about the place.

These bubble diagrams become squared-off spaces with walls, doors, windows, ceilings, materials... you start to figure out how a roof might be shaped to cover it all... and the house design goes on from there, getting more and more refined, stretched, re-organized, detailed, etc. - that's the design process!