When the weather (and holiday schedule) has allowed them to work, the framers have been finishing the wall sheathing and applying the roof sheathing. The new house next door was all decked out for Christmas in red and green! 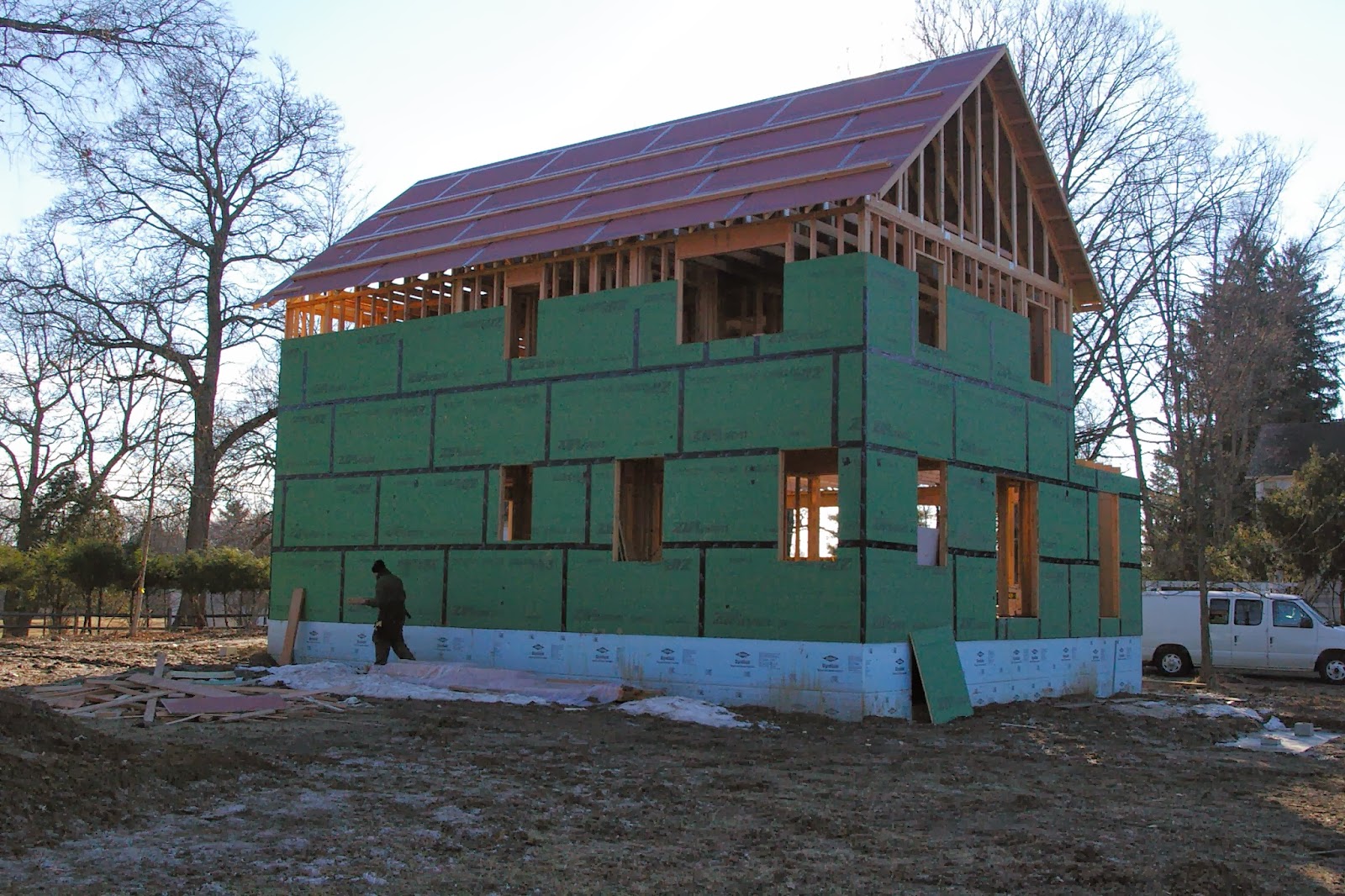 (Red) Advantex roof sheathing over the trusses on the second floor (because they are 2'-0" on center and need a material that is rated to span that) and (green) Zip sheathing on the low, stick framed roof over the kitchen and dining room (where the framing is 16" on center).

Both of these sheathings are a bit more high-tech than plain old plywood. (though not as high tech as the Zip-R wall sheathing that has integrated rigid insulation as well) The red or green color is actually an integral water management membrane, so a separate one is not needed. Dan, the contractor, likes to use these products because of the time savings. The guys install it once and don't have to go back over the entire area again to apply roofing paper or house wrap. 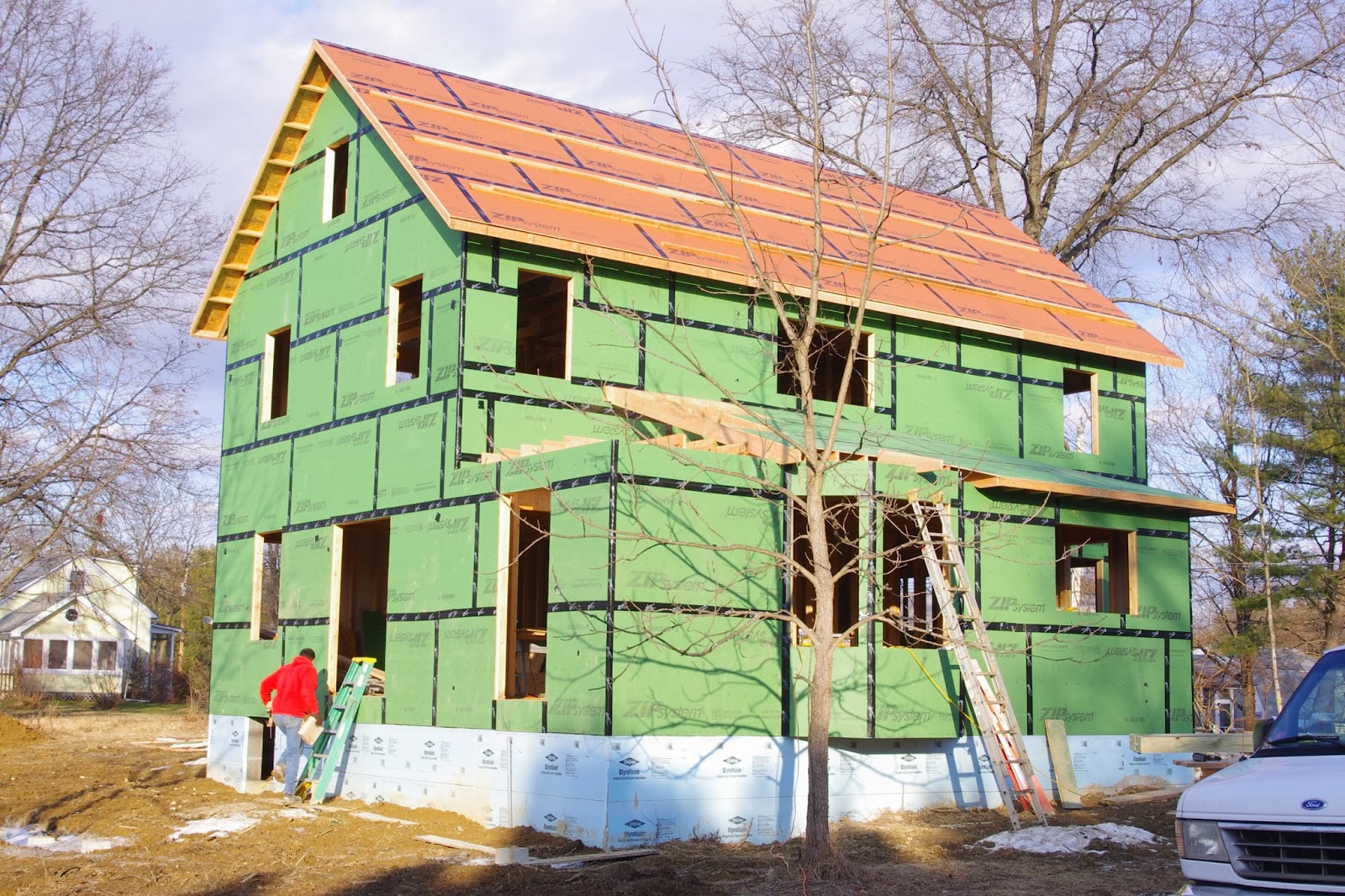 Posted by Christie Wheate Billeci at 4:25:00 PM No comments:

It's been snowing lately...I guess when one sighs about rain in December on the Internet, the universe listens! It's very pretty, and not really enough to disrupt life - other than to keep the framers away! I was told that they really dislike having to shovel the inside of a house. (fair enough!) 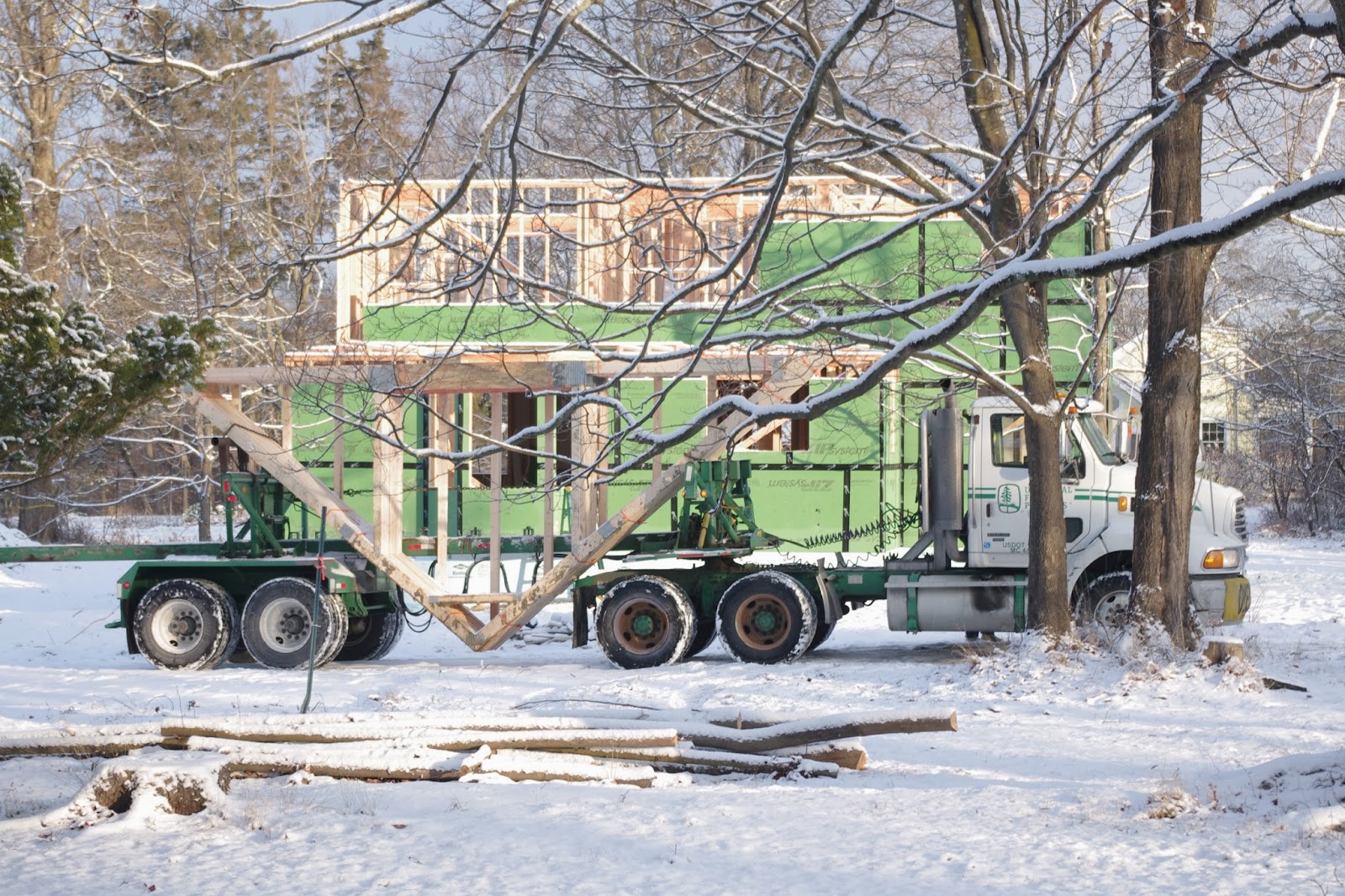 Last week the roof trusses got delivered. Note the special trailer with no bottom in the middle such that the peak of the roof (pointing down toward the road) is so close - almost touching! - the ground.

After the trusses were unloaded from the truck, the driver tried to leave, but he was stuck for a while while the framers tried to dig him out. (who knew how much shoveling a framer has to do?!)

Trusses are interesting. They are factory built using lumber and fasteners under an engineers guidance (rather than the alternative - "stick built"- which, like the walls and floor are assembled on site from individual pieces. The main advantage of trusses (to the architect) is that they can span much farther than stick framing. The interior partitions are not load bearing at all and so can be placed (or removed) anywhere. To the builder, I'd guess the advantage is how quickly the roof can be put on.

This is an "attic truss", which means it is designed to have a floor for storage right down the middle (highest area) of the space.

Once the trusses were on site, the framers worked to apply the rake overhang. The rake is the edge of the roof by the triangle- or gable. (as opposed to the eave overhang - which is created by the rafter tail). They build this like a little ladder and attach it to the gable end truss. As as aside, overhangs are useful. They create shadows and shade and they protect the walls from weather, directing water away from the wall. Plus, they can really add an architectural statement, if proportioned and detailed correctly.


Later in the week, a crane came to the site. The crane and a crew of a few guys worked to precisely place and secure the main roof trusses as per the 2'-0" on center layout. The framers also started applying the fascia, which is the board along the bottom edge of the roof truss tail. (where the gutter will be installed). Now the roof is ready for sheathing! And that means no more shoveling inside the house. Yay!
Posted by Christie Wheate Billeci at 4:08:00 PM No comments:

So it occurs to me I have shown the site plan way back in my first post and the front elevation in my "Context" post... but I haven't shared the floor plans yet!
Here are the drawings showing the layout: 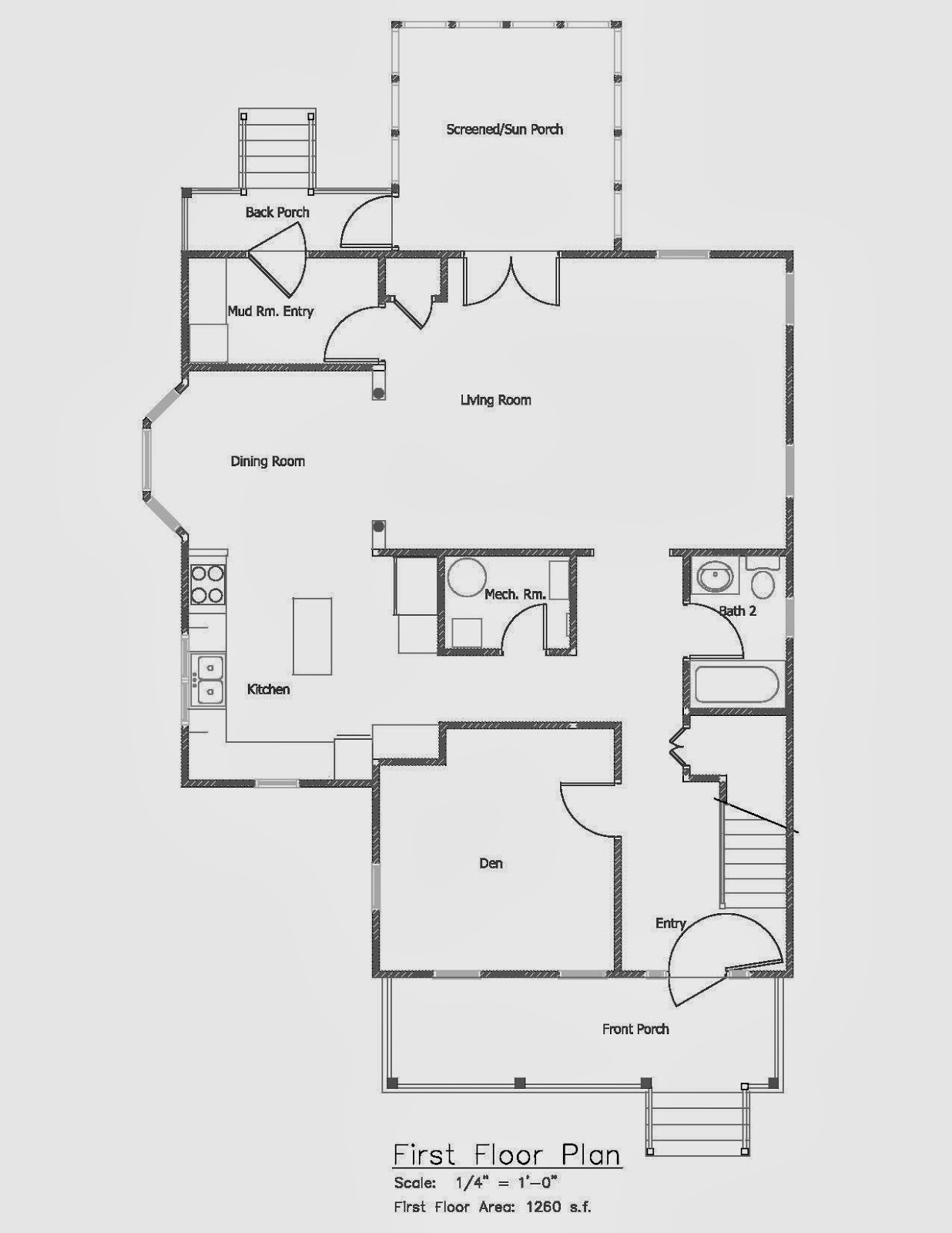 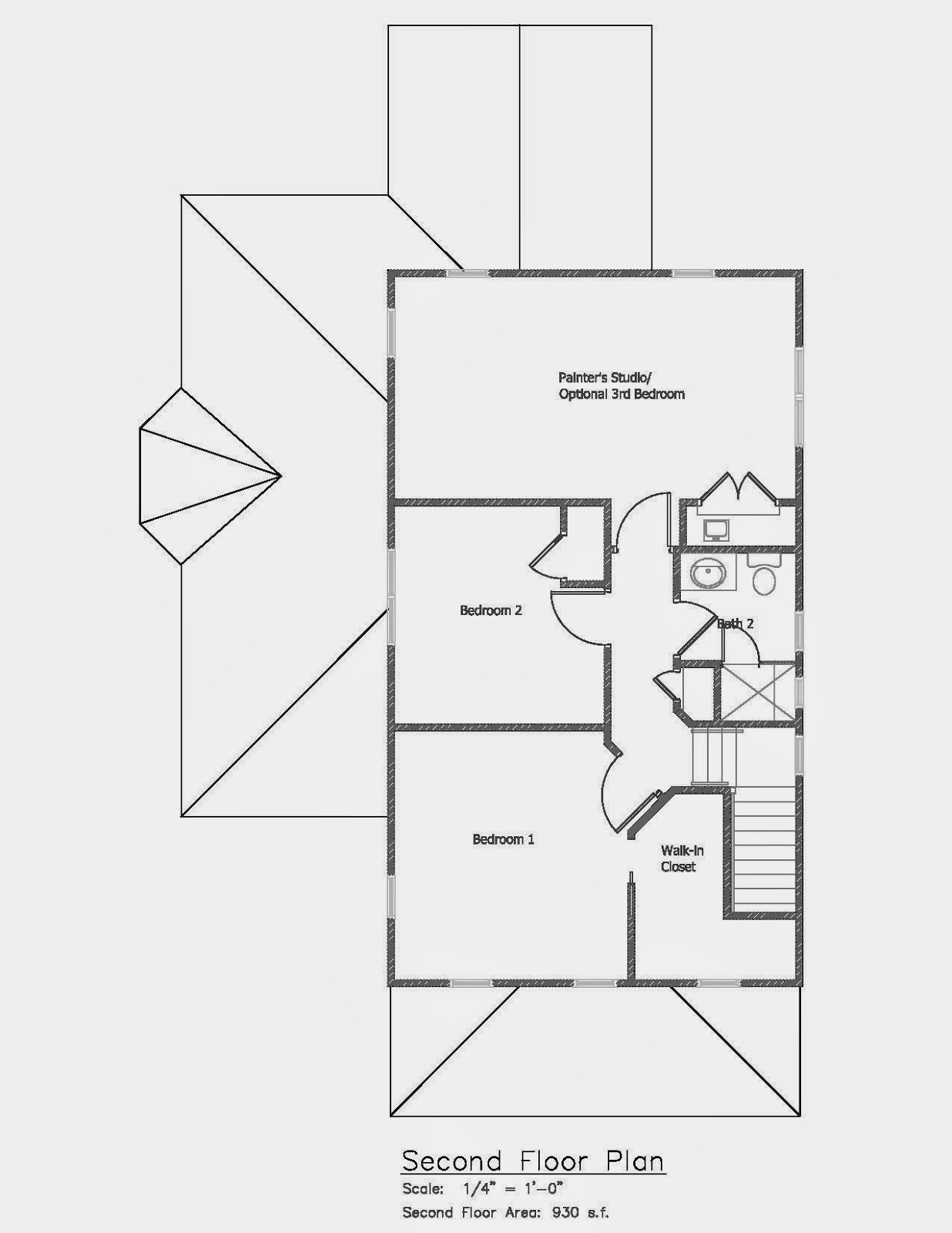 Posted by Christie Wheate Billeci at 1:38:00 PM No comments:

When it's not raining too much for them to work, (Sigh! Rain in December?!) the sheathing is going onto the outside of the exterior wall framing.


In most of today's building, sheathing is 4'x8' sheets, installed horizontally, to the outside edge of the wall studs. If structural, sheathing provides lateral (forces from the side, like wind) support to the walls. Once the sheathing is installed, those temporary diagonal braces we saw placed around the structure can be safely removed.

The product being used on the new house next door is a fabricated sheet that integrates the structural sheathing along with rigid foam and a water management barrier. Instead of three different materials, this product - called Zip R - is all of them on one board. Kind of neat - and a labor saver for the workers.

The continuous 1" of rigid insulation that is part of the Zip R provides R-5 insulation value to the wall. But R value is not the whole story... Building scientists have studies thousands of buildings and learned that just having a high R value is not the silver bullet we all once thought it was. Wall studs are responsible for thermal bridging (a connection from out to in and vice-versa) creating a conduit for moisture and heat to travel through the wall. (that's a bad thing) Continuous insulation stops thermal bridging. So do insulated headers. CI also puts the insulation on the outside of the wall, and with taped seams can be a fairly effective air barrier as well. That little ol' R-5 does a lot for the wall as a system. That's why I could then frame the walls from 2x4s (instead of 2x6s) because I didn't need such a thick cavity space for a higher R value in my wall cavity.
Posted by Christie Wheate Billeci at 11:36:00 PM No comments:

I wanted to try out advanced framing techniques with this house. Here is what that means and what I've learned so far...

Advanced framing means framing smart with the goal being to minimize over-use of wood and redundancy. Some tried and true ways to frame a wall or floor or window opening have been analyzed because some of them are putting extra wood where it really isn't needed. Advanced framing came into being because often walls are insulated within the cavity - the spaces between the wood - and if we want to make a wall better insulated, we want there to be less wood and more space for insulation. Also, wood is not such a cheap and accessible resource as it once was.


There are some basic wood saving techniques that are easy to implement and are worth thinking about. These include open rather than solid corners, omitting headers in non-load-bearing walls and even omitting jack studs in favor of header clips. On a small building, stacking framing and using single top plates is intriguing. (I found it incompatible for this design because I wanted to use roof trusses @ 24" o.c. and 2x4 wall studs, which couldn't be 24" o.c. in two story construction by NYS code.)

Some of the suggestions to minimize framing around openings seem to only be applicable if the interior and exterior casing are very minimal. For this project, we had to have double studs each side of a window for the trim to have something to nail into.

So, it has been an interesting experiment. And I see the short-comings of advanced framing. Like other engineering ideas, they leave little room for aesthetics. When windows are centered or placed deliberately (like on the front gable elevation) it is quite difficult to plan for non-redundant studs. When open spaces require rotated floor joists, headers are now required on both the gable and eave walls. And, like I mentioned, if one wants nice wood trim (inside) and casing around the windows (outside), then wood of more than one stud width is required for nailers.

Ah, well... Next we will be building a simple, one floor, rectangular open room wood shop building for my husband. The simplicity of that structure allows for more advanced framing techniques to be implemented. Like everything, it's a balancing act...

The second floor walls are built now. Even without the roof, the view of my (former) closest neighbor is now obscured when I look out my window because of the height of the new house next door.

Some folks I talk to are surprised that a house designed for senior citizens has a second floor. There are a few reasons. First, the village pattern book required it. Traditionally, village buildings are not ranches, so in order to "fit in", new construction should be more than one floor.

Second, once my in-laws understood that to build next door to their son they needed a second floor to meet the code, they stopped looking at ranch plan books and started realizing something. Their peers who had down-sized to one-level living were no longer physically able to easily climb stairs. It's that "use it or lose it" principle. Having stairs started to seem like a good way to get some exercise and stay fit while they age.

A quick internet search shows that this is not a new idea. Organizations and communities exist which promote "healthy design", including encouraging stair climbing by having open, visible, well-designed stairs.We are talking mostly about commercial buildings, where one typically is directed to the elevator... or if you search it out, you have to option of opening a door to take a bleak looking set of concrete steps- the code-mandated enclosed fire-rated egress stair.

I've been at the hospital the last few days visiting a family member. The corridors and signage direct visitors to the elevators, but yesterday I sought out the stair instead. As expected, it was grim (bare and windowless with utilitarian signage announcing "No Roof Access" - you know what I mean). It would be nice if future commercial building designs could encourage the occupants to exercise by offering nice stairways someday. For now, I will take the stairs despite their unattractiveness. What I do see more and more is another smiling face climbing with me.

Email ThisBlogThis!Share to TwitterShare to FacebookShare to Pinterest
Labels: design, framing
Newer Posts Older Posts Home
Subscribe to: Posts (Atom)
Please visit my website:
christiebilleciarchitect.com
to see more from my portfolio
and learn about how I approach
architectural design