The Adirondack Cottage on the Lake I designed is now enclosed from the weather. The roof is on, the walls have their insulated sheathing and windows installed, and some temporary doors are installed. Porch and deck floors have been framed and one can really see the entire massing of the building and get the feeling for all the rooms - interior and exterior. It looks and feels fantastic!

I am pleased by how connected each room feels to the lake in particular, and the outdoors in general and how the balcony bridge and soaring feature window really make the interior unique the moment you step through the front door. My layout of windows, glass doors, transoms, and outdoor decks/porches, as well as the placement on the site, really maximized this water-front property. The house totally takes advantage of it's location.

Other than the master bedroom suite tucked to one side of the floor plan behind the fireplace, most of the first floor area is open. The great room is the focus with many, many windows reaching upward toward the roof, and fireplace, and a high ceiling with a balcony looking over into it. The kitchen and dining spaces are in view, and a first floor office/bedroom is also very visible, with glass French doors as it's entry.

The second floor rooms and balcony are tucked up into the roof. This helped the massing of the home fit in with its petite neighbors a bit better. Windows pop up in dormers from the roof and the bridge balcony allows one to be high up with views down into the foyer, the great room, and out the many lake side windows toward the water.


To read the previous post on this project click on the link below:
cwb-architect.blogspot.com/chapter2-adirondackcottageonlake
Posted by Christie Wheate Billeci at 4:43:00 PM No comments:

Here is a fun post that shows the same "solution" implemented at two different projects of mine.

Did you ever hear it stated that people used to be smaller? Well, furniture certainly used to be smaller. And people had way less stuff. Houses have grown much larger compared to the average family home of decades years ago. From the Census Bureau:

With our king or queen sized beds, dual dressers, matching nightstands, and perhaps a cozy chair or bench at the bed's foot board, many bedrooms in older homes are simply not large enough to fit us! Add to that the issue that average folks years ago did not have nearly as much clothes and shoes as we often do today- and that means many homes do not have enough closet storage space either.

This was the issue with two different clients of mine. We removed a wall between two small bedrooms to create one larger "master" bedroom.

The first example was originally two really small rooms in an older home. The new room spans from front of house to back of house, 17.5 feet, allowing it windows on 3 sides. A new window was added for balance/symmetry, so there are a total of 6. windows (Six!) two on each wall. The area that used to be hallway to access the back bedroom was taken over to become double closets in the new master bedroom. We kept the windows, doors, and trim matching the rest of the existing home, but the clients personalized the space with more contemporary touches like interesting flooring, mirrored closet doors, and lighting. The carpenter cut back the oak stair rail such that no one can tell we made a change. This is always a design goal of mine: for an addition or renovation, especially in a historic home, to be seamless and harmonious- being sure to not have an abrupt or glaring line between "old" and "new" changes.

The other project I did this type of renovation on is also an older home, where bedrooms were small and there were almost no closets. One bedroom had already been re-purposed into a more useful second floor laundry room. Below is the before and after floor plans, where you can see how the design created a stair up to the attic, a renovated bathroom with a shower, a second floor laundry room with lots of storage, and a new large master bedroom with a large walk-in closet and many windows toward the river view. 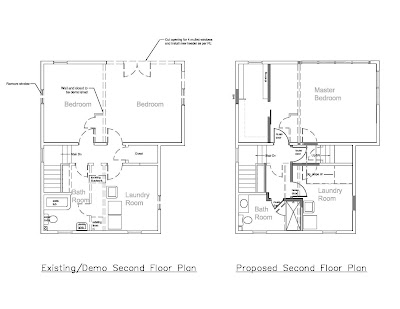 Not everyone can remove a bedroom- some 3 bedroom homes, no matter how small the rooms, need to remain 3 bedrooms. But when it's possible, I find folks who live alone, or whose kids are grown and gone, are very happy to make the layout of the spaces work better for them personally, rather than worrying about re-sale. The  truth is that there are many homeowners who don't have 2 kids or need 3 bedrooms, and so more and more we find that renovating to create a more personalized living environment rather than the "standard" family home makes sense.
Posted by Christie Wheate Billeci at 9:54:00 AM No comments:

Email ThisBlogThis!Share to TwitterShare to FacebookShare to Pinterest
Labels: adding on an old house, interiors, plans
Newer Posts Older Posts Home
Subscribe to: Posts (Atom)
Please visit my website:
christiebilleciarchitect.com
to see more from my portfolio
and learn about how I approach
architectural design